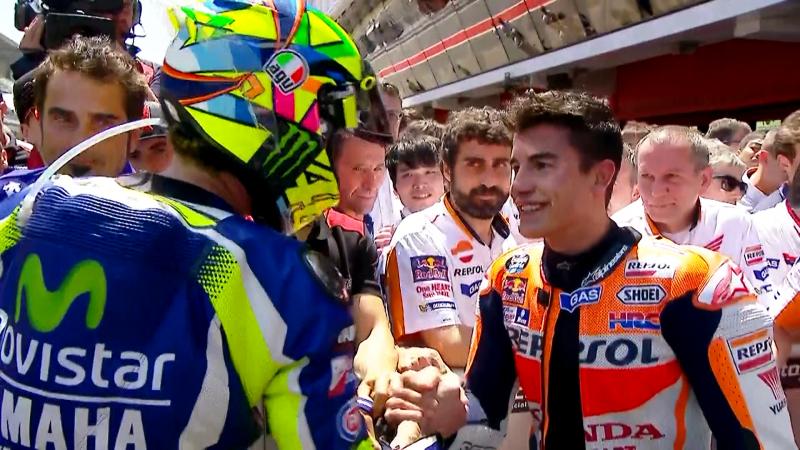 The eighth Round of the 2016 MotoGP ™ World Championship will be held this week on the iconic layout of the TT Circuit Assen, is expected to be the scene of another exciting assault in the fight for the title. This circuit remains as the only one that has held a grand prize every year since the World Championship was first convened in 1949. Since then the layout has been modified on different occasions, the most recent of them in 2006. There may have been changes over the years, but the vertiginous sector between the turns of Ramshoek Y Geert Timmer and the finish line always leaves unforgettable end of career.

The protagonists of the MotoGP ™ World Championship joined during the last Grand Prix of Catalonia remembering Luis Salom and offering three magnificent careers in his memory. Valentino Rossi (Movistar Yamaha MotoGP) and Marc Márquez (Repsol Honda Team) fought for victory until the last lap, at which time Márquez could not keep up with his rival. With his second victory of the year Rossi recovers the train from the fight for the title. Assen has always been a special circuit for Italian driver of 37 years, achieving a total of seven victory in the queen category and being the scene in 2009 of the 100th victory of his medal winners. In the 2013 edition, in addition, he managed to break a streak of 44 races without winning by climbing to the top of the podium for the first time since his return that same season to the ranks of Yamaha.

"After the storm comes calm."

Another of Rossi's most exciting victories came in the 2015 season, thwarting any attempt by Márquez in the last chicane to be touched by him and plotting straight through the gravel the second part of the conflicting "that" final. Márquez then had to settle for second place on the podium, losing victory on this stage only for the fourth time in his career.

Now, the Motul Grand Prix from Holland It will give Márquez the perfect opportunity to increase his lead at the head of the provisional classification of the championship over Jorge Lorenzo (Movistar Yamaha MotoGP). With 125 points so far, the Honda driver arrives as a leader in Assen with 10 points ahead of Lorenzo and 22 over Rossi.

The current situation leaves the most disputed panorama among the top three of the classification MotoGP ™ since Casey Stoner, Jorge Lorenzo and Dani Pedrosa (Repsol Honda Team) were separated by only 19 points in 2012. There is currently no clear favorite for the title, as both Rossi and Lorenzo accumulate already two dropouts this season, to which is added the fall suffered by Marquez in Le Mans.

The Grand Monster Monster Energy of Catalonia was a terrible race for Lorenzo, since the lack of grip ended his chances of victory. Sunday was even worse, as it was rammed by Andrea Iannone (Ducati Team) in turn 10 and the two were then lucky to leave the situation on their own. The result for Lorenzo was zero points, while Iannone must start from the last grid position in the next Dutch GP.

Lorenzo returns to action in Assen.

Unfortunately for Lorenzo, in Assen he accumulates disparate results and has almost always been for reasons beyond his control. In 2011 he was dragged by Marco Simoncelli during the first round and the following year by Álvaro Bautista in the first corner. His bad luck in Assen continued in 2013, when he broke his collarbone during Thursday's training and was forced to star in a heroic return to Saturday's race after undergoing surgery. Lorenzo's only victory in Assen in the queen category goes back to the 2010 season, to get back on the podium with his third place in the 2015 season.

Dani Pedroza has climbed five times to the Assen podium, where he won his first win in 2002.

Factory riders must follow others like Cal Crutchlow (LCR Honda), who seems to have regained their tune with their motorcycle after achieving their best position of the year in Barcelona and the best time in the test held the next day in The same scenario. Crutchlow has only finished once in Assen beyond the top ten and took pole position in 2013 on the Yamaha Tech 3 handlebars to finish third in the race.

Dani Pedrosa (Repsol Honda Team) is another driver who returned to his best form in the recent round of Barcelona, ​​achieving the first grid line for the first time this year to achieve his second podium of the season on Sunday. Honda carried different components to the test the next day, including a new chassis and an exhaust. Despite running in the premier category since the 2006 season, Pedrosa has never won on the historic layout of the Netherlands.

In Barcelona, ​​neither Aleix Espargaró (Team Suzuki Ecstar) nor his teammate Maverick Viñales ended up achieving the results they expected. Now Assen will give them a new opportunity. This is a special circuit for Aleix, which was made in 2014 with its first MotoGP ™ pole in this same scenario.

The battle between independent team drivers continues to be led by Pol Espargaró (Monster Yamaha Tech 3), sixth at the moment with 11 points ahead of Héctor Barberá (Avintia Racing). The third independent place is currently occupied by Eugene Laverty (Aspar Team MotoGP), eleventh in the general classification. (MotoGP)