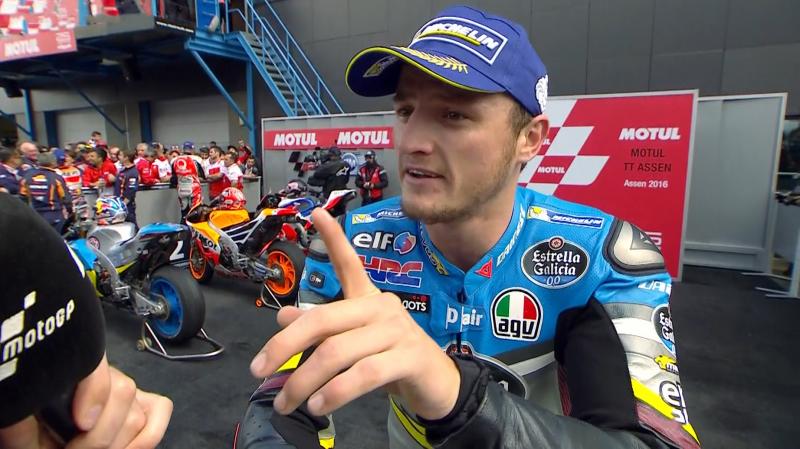 Miller reigned in the chaos of Assen.

The MotoGP ™ Dutch Motul Grand Prix was held this afternoon at the Assen circuit with the victory of the Australian Jack Miller (Galicia Star 0.0 Marc VDS) – a pilot who jumped directly from Moto3 to MotoGP – which was imposed online goal for 1.9 seconds to championship leader Marc Márquez (Repsol Honda Team) and Briton Scott Redding (Octo Pramac Yakhnich) in a chaotic race in the rain characterized by numerous falls.

Before the start it seemed clear that it was going to be a wet race because of the rain at the end of the Moto2 ™ race. However, as the time for grilling approached, doubts assaulted the pilots because the track seemed to start to dry.

After the appearance of the red flag for rain, Directorate of Race decided to give a new exit to 12 laps

The riders finally started with rain tires and after the start Yonny Hernández (Aspar MotoGP Team) led comfortably until they suffered a fall. On lap 15, when the new leader was Danilo Petrucci (Octo Pramac Yakhnich) with Andrea Dovizioso (Ducati Team) and Valentino Rossi (Movistar Yamaha MotoGP) at his wheel, the red flag appeared due to the heavy rain that was falling on the Assen circuit.

Career Direction decided to give a new start for the 12 laps that remained to be played of the 26 scheduled, with the order of lap 14 that left Dovizioso first on the grid.

In the new exit the advantage was for Dovizioso, followed in those first moments by Rossi, Márquez, Petrucci, Cal Crutchlow (LCR Honda) and Miller. At that time Aleix Espargaró (Team Suzuki Ecstar) fell. Later Dani Pedrosa (Repsol Honda Team) would fall, but he would return to the track.

Rossi took the head of the race while Crutchlow fell and Miller took a surprising fourth place. Lorenzo was going fourteenth, gripped by the conditions. Petrucci would be the next victim of a technical problem and Dovizioso lost control of his Ducati. With Rossi leader followed by Márquez and Miller, the race covered a rugged first third.

The head trio seemed unattainable, but Rossi also fell in the fourth lap leaving the race head on a plate to Marquez, harassed at the same time by Miller. Rossi tried to return to the race, but finally gave up.

The fall of Rossi when leading the race.

Eight laps from the end Miller passed Marquez to be a new career leader. The Australian was facing the possibility of achieving his first victory in the queen category. After the fall of Rossi, the third man on the podium became Pol Espargaró (Monter Yamaha Tech 3). By then the fall of Michele Pirro (Avintia Racing) had already occurred.

Redding: "It cost me more at the beginning."

Six laps from the end Miller was a leader with 1/2 seconds over Marquez, who was trying to regain ground to the Australian. Meanwhile, Espargaró and Redding fought for the third step of the podium.

Knowing that both Rossi and Lorenzo would not have a good result, Márquez would relax his pace to give Miller 2'2 seconds of space. Redding passed to Pol Espargaró, who lost his podium position when there were two laps left.

Marquez: "I have focused on doing my career."

Miller finally won his first victory in the MotoGP ™ category, accompanied by Márquez and Redding on the podium, the second of the British rider in the queen class. Among the rest of the Spanish pilots, Tito Rabat (Estrella Galicia 0,0 Marc VDS) finished twelfth and Pedrosa thirteenth.

In the provisional classification of the championship Márquez continues leading with 145 points, followed by Lorenzo with 121 and Rossi with 103.

The next round of the MotoGP ™ World Championship will be played on July 17th 2016 at the GoPro Grand Prix of Germany, Sachsenring layout. (MotoGP)